Researchers have extensively reported that methylated regions identified by MethylCap-seq could be validated with classical bisulfite sequencing (1 to 4).

Recently, a paper was published reporting a medium scale study on a collection of 24 colorectal cancer sample using Methyl-cap with Diagenode’s IP-Star automated workstation (5). In this assay, 2687 frequently hypermethylated and 468 frequently hypomethylated regions were identified. These data were then confirmed by the bisulfite conversion method.

Methylation of CpG dinucleotides is generally associated with epigenetic silencing of transcription and is maintained through cellular division. Multiple CpG sequences are rare in mammalian genomes, but frequently occur at the transcriptional start site of active genes, with most clusters of promoter CpGs being hypomethylated. 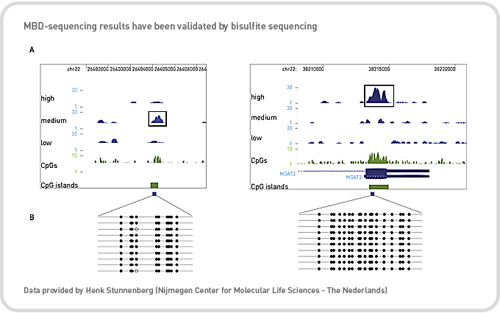