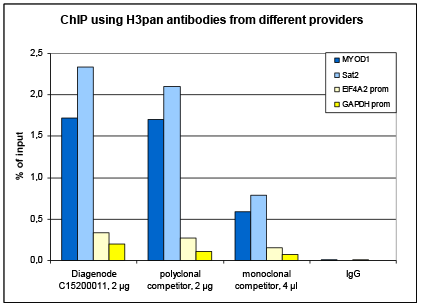 ChIP assays were performed using human HeLa cells, the Diagenode monoclonal antibody against H3 (cat. No. C15200011), a monoclonal and a polyclonal antibody from different providers. ChIP was performed with the “Auto Histone ChIP-seq” kit (cat. No. C01010022), using sheared chromatin from 1 million cells on the SX-8G IP-Star automated system. The recommended amounts of antibody per ChIP experiment was used. IgG (2 µg/IP) was used as a negative IP control. Quantitative PCR was performed with primers specific for the inactive MYOD1 gene and the Sat2 satellite repeat, used as positive controls, and for the promoters of the active GAPDH and EIF4A2 genes, used as negative controls. The figure shows the recovery, expressed as a % of input (the relative amount of immunoprecipitated DNA compared to input DNA after qPCR analysis). 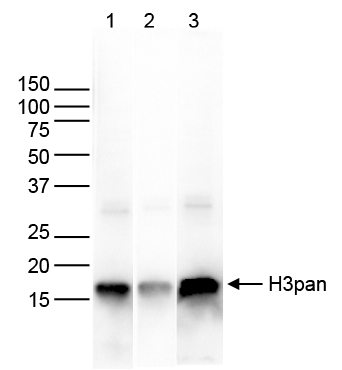 Western blot was performed on 25 µg whole cell extracts from HeLa cells using the Diagenode monoclonal antibody against H3 (cat. No. C15200011, lane 3) as well as a monoclonal (lane 2) and a polyclonal (lane 3) antibody from different providers. The antibodies were diluted 1:2,000 in TBS-Tween containing 5% skimmed milk. The marker (in kDa) is shown on the left, the position of the protein of interest is indicated on the right.